East Jefferson General Hospital is proud to be among the first to introduce breast tomosynthesis or 3-D mammography to our region. This revolutionary technology allows for imaging of the breast from multiple angles. This can significantly increase the accuracy of mammography, especially for women who are premenopausal, women with dense breasts or those with increased risk factors.

Dr. Mary Beth Lobrano, a radiologist at East Jefferson General Hospital, considers 3-D mammography the single greatest breakthrough in mammography since the start of her career. “We know that women with dense breasts have a 4 to 6 times increased risk of breast cancer, independent of other risk factors, and that traditional 2-D mammography is less accurate in this population,” says Lobrano. “Tomosynthesis significantly increases the detection of breast cancer in these patients.”

To the patient, 3-D mammography takes the same amount of time and exposes them to the same low-dose of radiation as the latest versions of traditional mammography, but the outcome of the exam itself is significantly improved.

In the example to the left, the conventional magnification view indicates increasing indistinct linear calcifications in the superior left breast. They appeared suspicious, and a biopsy would have been recommended. However, the 3-D mammography views demonstrate that these were benign vascular calcifications—so no biopsy was needed. 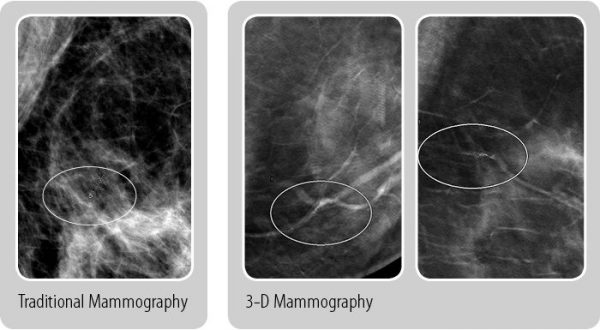 If you are premenopausal, have dense breasts or have increased risks of breast cancer, Ask your physician if 3-D mammography is right for you.